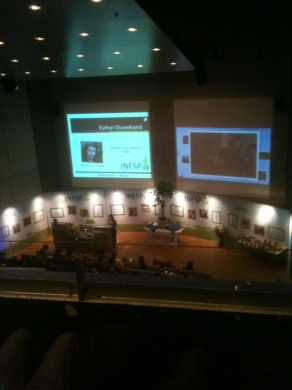 Thank you for your kind invitation. My name is Esther Ouwehand. I am a member of Parliament in the Netherlands for the Party for the Animals. Our party is the very first political party in the world which has been chosen in a national parliament to stand for the interests of animals. According to scientists, it has not occurred in history before that there has been a political party in a parliament which does not focus on short-term interests of humans, but considers another species, animals, as the core of its concern. In that sense, the Party for the Animals is unique.

Do we think then, that animals are more important than humans? Not at all. We think that not the right of the strongest, but the interests of the most weak in our society have to be the main issue of concern.

If we keep the interests of animals, nature and our environment in mind, we shall do the same with the people living now and with our future generations. The Party for the Animals is celebrating its tenth birthday this year and has seats in the national Parliament, in the Senate and in the provincial and municipal councils. We also have our own research office, the Nicolaas G. Pierson Foundation and our own youth organization, called PINK!.

Just like you, we are continuously searching for environmental sustainable solutions, because we think we humans destroy the planet and its resources on which we ourselves depend. Now, with nine billion people literally exhausting the earth, we can see we have to do something. Scientists and policymakers try to find sustainable solutions to handle the great problems of our time. They invent electrified cars, solar cell panels, so called green ways to produce energy.

The question is, are these solutions really enough, do they provide the means to make the great turn to save our planet? Do we feel enough urgency for a radical different direction, and is that direction realizable? Or better, can we afford it not to choose for a totally different track than the one we take now?

I am inclined to be optimistic, but in several ways we are standing at the edge of the abyss. In the sense of financial means, natural resources, biodiversity, medicines and drug resistance, global warming, the division of nutrition, and the strained relation between rich and poor.

Of course, you can think of the most advanced technical sustainable solutions. But today I would like to offer you one which is not so complicated. In fact, it is very simple. You are all looking for the egg of Columbus to make sustainability possible. Well, I think I have found the egg. Not as the end solution, but as a recipe for a solution which we are all looking for.

Actually Einstein already knew the answer. He was convinced that the greatest contribution to saving our planet would be to switch to a vegetable diet.

So if you consider that it takes about 7 kilograms of corn and soya beans to make just one kilogram of meat, we are talking about hundreds and hundreds of hectares of soya bean planted in former rainforest to provide meat.

Between 40 and 50 % of all cereals are not eaten by humans, but by livestock. And for soy, that’s even more, about 75%. That’s not a very efficient way of producing protein food.

In total, livestock farming uses 80% of our present agricultural area. To produce animal products you need up to ten times as much land as is needed to produce vegetable products. And this is due to the fact that all this land is needed to produce feed for these billions of farm animals.

Of course, this has its influence on biodiversity too. 30% of the decline in biodiversity, is caused by producing meat.

Meat is also one of the most polluting parts of our food provision. The dairy cow for instance, produces around 500 to 700 litres of methane every day. So your average cow will produce around 700 litres of methane per day. This compares to the amount of greenhouse gas CO2 emissions produced by a 4x4 vehicle travelling around 35 miles per day.

So do you have any idea what part of total greenhouse gas emissions are actually caused by livestock farming? Eighteen percent! And what part is caused by transport? Thirteen percent. So all he cars, tractors, trucks, ships and planes in the world added together emit fewer greenhouses gasses than producing the meat we eat.

In a lifetime, the average European will eat 7 sheep, 24 rabbits, 43 turkeys, 789 fish, a third of a horse, 5 cows, 42 pigs and 900 chickens. The FAO has made some very interesting calculations about people and meat production. Between 1950 and 2000, the world population grew from 2.6 billion to six billion people. Yet meat production increased fivefold: from 45 to 233 billion kilos of meat each year. It is predicted that there will be nine billion people living on our planet by the year 2050. And what will happen with the meat production? The meat production will double to 450 billion kilos of meat by the year 2050. And, of course, the greenhouse gas emissions will double too.

People in upcoming economies will want to eat like we do. If everybody in the world would consume like the average Dutch person did in 2008, we would be needing 3,5 planets earth. Differences will get harsher, prices will rise, food will get scarce. That's not good for the hunger in the world, and might even be worse for peace. According to Rob de Wijk, of the Netherlands Institute of International Relations Clingendael, hunger can easily lead to war.

Amazingly, most political parties think the way out of present problems is growth. From left wing to right wing, from those who call themselves green to religious parties - they all think growth is the answer. But we grow over the edge of the abyss. And when looking into an abyss, the safe step is sideward or even backward.

This safe step could be switching to a vegetable diet. Together with the Free University Amsterdam, the Nicolaas G. Pierson Foundation set out to discover what kind of carbon savings could be made if we all went without meat for one or more days. This is the result:

If we all ate vegeatarian 7 days a week, we would save 22 megatons of greenhouse gas emission. Enough to cook, to heat our houses and to have warm water - for all the Dutch households.

If we all ate vegetarian 6 days a week, that would save more than the emisson of all cars in The Netherlands - so it would be like taken all cars off the road.

Three days would mean 3 million cars off the road

And two days, that would be like we all had energy-saving freezers, fridges, washing machines, tumbledryers, boilers, double-glazing and insulated walls.

And by just 1 day eating no meat - if all Dutch would - all our government's climate goals for households would be realized.